Have you ever wondered why container-stacks  collapse at sea? 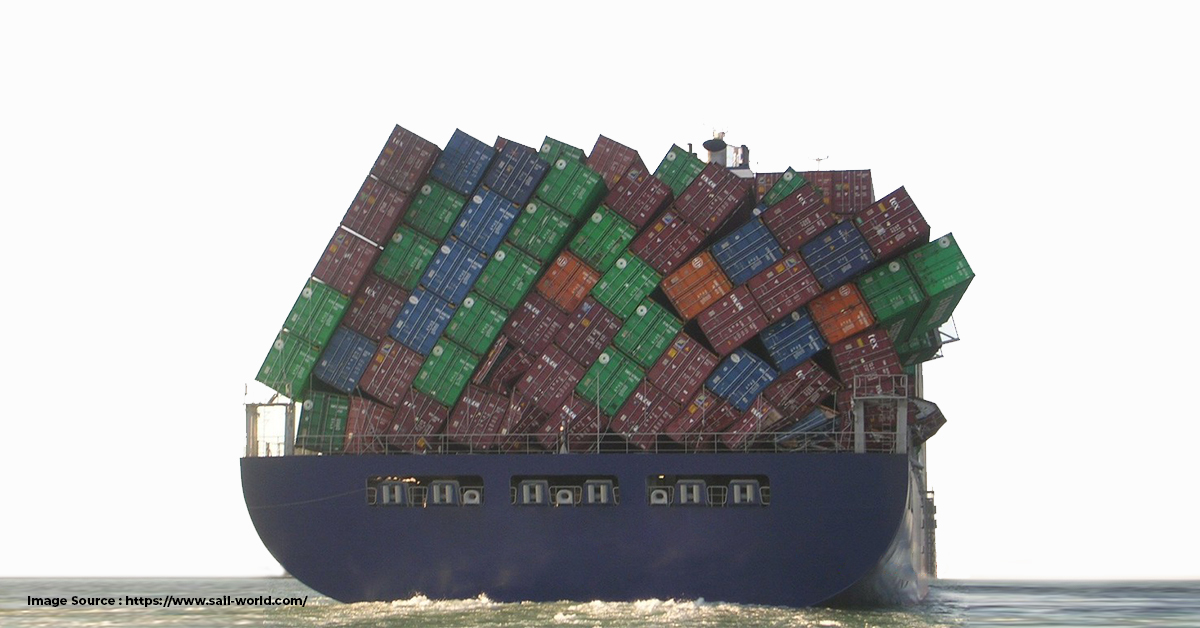 According to the World Shipping Council, between 2008 and 2019, an average of 1382 containers was lost at sea each year. This adds up to a staggering 16,584 containers lost during the period.

On November 30, 2020, shipping liner ONE Apus lost 1816 containers in mid-Pacific after it encountered a storm and heavy seas while sailing from Yantian Port in China to Long Beach, California.

Larger Vessels, Increased Capacity and Powerful Engines
Modern ultra-big container ships carry 14,000 TEUs and above, with a deck capacity of 24 bays, 24 rows and 12 tiers. The HMM Algeciras-class container ships introduced in 2020 have a capacity of 23,964 TEUs (Twenty-foot Equivalent Units) with a length of 400 meters, a beam of 61 meters and a gross tonnage of 2,28,283. Such large vessels are propelled by powerful engines delivering high speeds in all weather conditions. Commercial considerations mean that container ships have to adhere to strict operating schedules. When such large ships are driven at high speeds in bad weather, the loads on the container lashing and securing gears are impacted leading to loss of stability.

Wind Load
Strong winds in rough weather are one of the chief contributing factors to stack collapses. In fully loaded modern container ships, the stacks on the deck offer additional sections exceeding 25 meters high for strong winds to strike causing an imbalance. In combination with large freeboards, the stacks act like giant sails magnifying a vessel’s motion.

Parametric and Synchronous Rolling
New mega-ships incorporate large bow flares and wide beams designed to reduce the frictional resistance produced when the fore-end of the ship passes through the water alongside the hull. Even in relatively calm seas, it produces a type of motion called “parametric rolling” that alters the vessel’s stability causing it to roll to higher degree of angles.

“Synchronous rolling” refers to a natural rolling phase that is inversely relative to the square root of the metacentric height (MT) and directly proportional to the beam of the ship. This produces a rolling motion in accordance with the duration of the rolling, leading the vessel to heel over, and in certain cases even roll over further by the wave’s action. If the vessel runs into a series of swells in a way that the wave period corresponds with the natural rolling period, the vessel fails to regain balance before the next wave strikes. This eventually leads to negative stability and permanent capsize.

Waves and Water Entry
In rough weather, waves and vessel motions could lead to water flowing over the deck, known as “green water loading” that potentially triggers a collapse by generating excessive forces on the lashing and securing gear.

Incorrect Stowage and Overweight Containers
Deck stack collapses often happen in bays where the stack weight exceeds the maximum threshold. This misbalanced stowage has a direct bearing on the ship’s stability. The heaviest containers should be stacked in the bottom tier and the lightest at the top to reduce the impact of forces on the lashing and securing gear.

Structural Integrity of Containers
Containers can turn structurally weak over time preventing them from transferring strong reinforcement to other containers stacked on the top. Right stacking is dependent on the strength of buckling in the corner posts.

Inadequate Securing
Containers are fastened to each other with Twistlocks on the four corners. Lashing rods and turnbuckles secure the container stacks to the deck by attaching them to the hatch covers, deck posts and lashing bridges. Any breach in this process can hamper the ship’s stability.

Appropriate packing, stowage & securing of containers and declaring the correct weight are some of the key elements that guarantee a vessel’s stability ensuring the safety of the crew and cargo. Nevertheless, we must appreciate that rough weather is a contributing factor too, therefore optimum route planning based on weather forecasts can also be an effective way to circumvent unexpected mishaps on the seas.