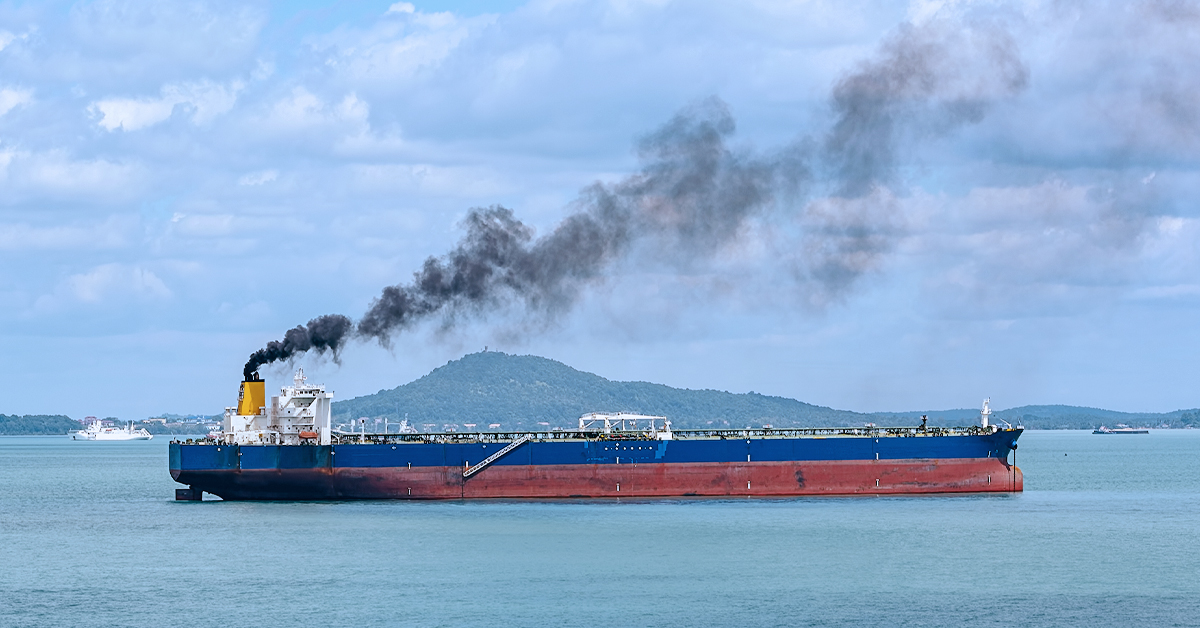 Let’s begin by figuring out the magnitude of atmospheric pollution caused by the maritime industry from an example. Barely 15 large mega-ships account for an equivalent amount of pollution as caused by 760 million cars in the world. Today, shipping is the sixth biggest contributor of emissions and accounts for 2.5% of global greenhouse gases. It is estimated that the maritime industry emits approximately 940 million tons of carbon dioxide annually.

Shipping vessels generates carbon dioxide, sulfur dioxides, nitrogen dioxides together with ballast water, biocides, and also causes accidental oil spills. Sulfur dioxides are also responsible for causing acid rains that affect crops, forests and aquatic species. A single container, for instance, sailing from China to Europe produces roughly 1.913 kg CO2. If this is calculated in terms of 90,000 cargo ships with 20,000 TEUs capacity each, the enormity of the problem caused by pollutants can be gauged.

The International Maritime Organization (IMO) plays a pivotal role in formulating strategies to keep the waterways clean by reducing pollution from ships, and engages in regulatory initiatives. In January 2020, the IMO mandated a new limit on sulfur content in the fuel used for shipping. This is considered a breakthrough initiative in enhancing air quality and safeguarding human health. The rule caps the sulfur content in fuel oil on board ships sailing outside the designated emission control areas to 0.50% m/m (mass by mass), which is a substantial decrease from the previous limit of 3.5%. It should however be mentioned that within the specifically designated emission control areas, the limits were already set at a more stringent 0.10%.

The reduced sulfur dioxide emissions from fuel oil used in ships will translate into significant health and environmental benefits.  Most of the ships will switch to higher quality, low sulfur content fuel to meet the new limits set by the IMO. It has been forecast that the new regulation will achieve a 77% drop in sulfur oxide emissions from ships, which calculates to approximately 8.5 million metric tons of sulfur oxides. Communities living close to ports and coastal areas will benefit from reduced respiratory and cardiovascular diseases, including premature deaths.

Several other measures can also control shipping exhaust emissions. Let’s delve into how such measures can help the industry as a whole.

Operational methods
Route optimization and “slow steaming” measures that reduce the speed of cargo ships to bring down fuel consumption and carbon emissions are being adopted now. Slow steaming container ships cruise at a speed of 12 to 19 knots per hour as compared to the normal 20 to 24 knots, thereby reducing engine power and rate of fuel consumption. Studies have revealed that a 12% reduction in speed achieves a 27% reduction in fuel consumption and thus lesser greenhouse gas emissions. Weather-based route optimization is a way to forecast ship performance in different sea route conditions to reduce the consumption of fuel.

Design optimization
Changes in hull design, propeller optimization and heat recovery are other measures that can be employed to reduce emissions. Drag can be reduced by fitting ship bows with globular extensions below the waterline.

Repositioning of empty containers
It is interesting to know that one-third of the containers sailing the seas are empty. Such empty containers are repositioned because of operational inadequacies and trade imbalances. Therefore measures that can eliminate the need to move empty containers could reduce pollution from cargo ships by 30%.

Sustainable energy
Wind-assisted propulsion, although a system of the bygone era is gaining attention today as an alternative to fossil fuel combustion. Experiments are being conducted to study its feasibility, but they are still in the nascent stages of development.

Battery-powered ships
Battery-powered propulsion is becoming a reality with the development of “e5” - a 60-meter long and 10.3 m wide tanker that uses only lithium-ion batteries with zero-emission and fully electric propulsion.  It is expected to ply the Japanese coastline by 2022. Powered by 3.5 megawatt-hour (MWh) energy storage system, it has a gross 499 tonnage.

Climate change is a topic high on environmentalists’ agenda world-over. The most notable reduction in maritime pollution can be achieved by switching to fuels with low sulfur content. It is the collective responsibility of the shipping and logistics industry to contribute towards cleaner air and better management of climate change.