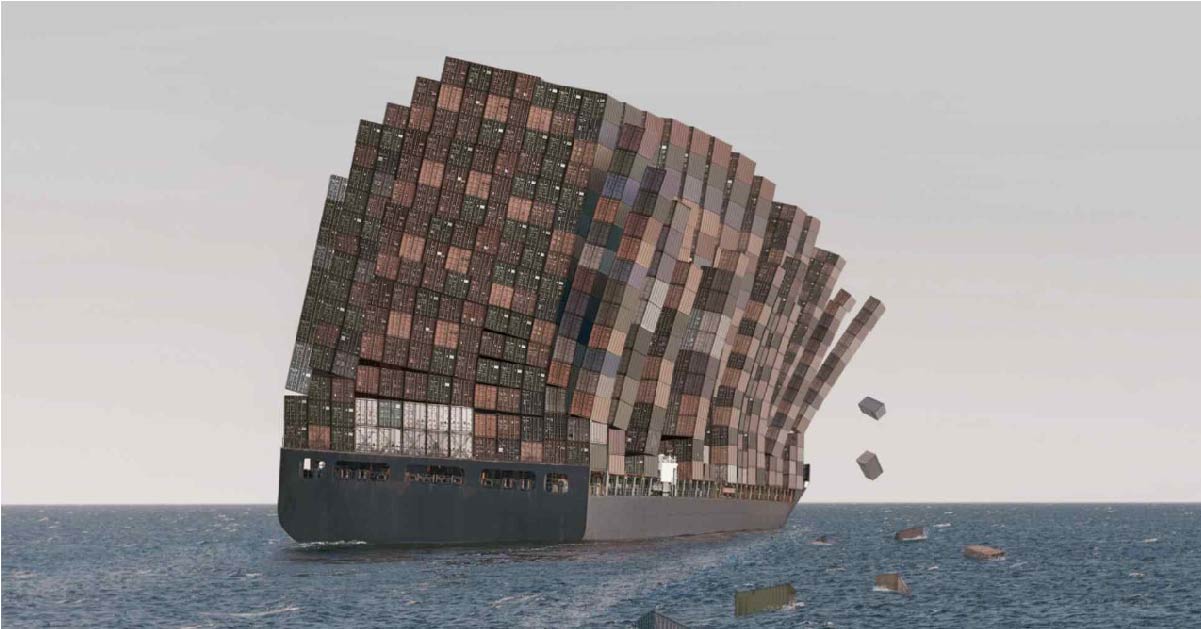 Over 226 million containers crisscross the oceans each year, carrying cargo worth an estimated $4 trillion. The World Shipping Council estimates that between 2008 and 2019, a yearly average of 1382 containers fell from the vessels and sank into the seas. Last year, over 3000 shipping containers fell into the oceans, while, this year, the count is about 1000 boxes. Containers which fall from the open decks in ships and get lost in the sea present major safety and environmental hazards, besides the millions lost in monetary terms.

What leads containers to fall from the ships?

When ships set out to sail in the oceans, they face 6 different external forces called heave, sway, surge, roll, pitch and yaw. Extreme weather, particularly wind, storm and waves, amplifies these forces and renders the vessels unstable. Sudden variations in weather are unpredictable, while the ships are also getting larger, letting containers to be stacked higher. Tragic consequences include death, injury and loss of cargo. Container ships in particular, and multi-purpose ships transporting containers on deck with a high Centre of Gravity (CoG) and low residual stability fall under the high-risk category.

The expanding in e-commerce industry leads to greater demand for consumer goods that must reach their destinations on time. This surge in the demand for goods in distant markets means huge container ships are sailing to full capacity compared with earlier times. The incident involving ONE APUS comes to our mind, when in November last year, 1,900 containers sank into the sea when the ship encountered a storm in the Pacific Ocean while heading for Long Beach, California, from China. The loss was estimated to be $90 million.

Shipping Lines are under pressure to optimize cargo capacity and increase revenue. They are thus compelled to carry loaded containers stacked high on the deck. Although this causes a relatively high Centre of Gravity, on completion of the loading, the CoG and residual stability get reasonably ideal for ships to sail safely. However, this does not deliberate upon the probability of developing serious imbalances in vessel stability that can arise from strong winds, storm or waves.

Ships confronting heavy weather coupled with poor maintenance of twist locks and lashing rods that are essential for securing the containers increase the chances of mishaps. Waves cause vessels to roll at steep angles, affecting the balance of containers stacked high one above the other.

Overcoming hazards and the way ahead

Right packing of goods inside containers, correct stowage, strong fastening of containers and declaring the correct container weight are crucial to the stability of vessels sailing the oceans.

Mis-declared weight of containers: Shippers often purposely mis-declare the weight of containers to save freight charges. The rules require shippers to provide a “Verified Actual Gross Mass Weight of the Container” (VGM) to the master before the container can be loaded on board a vessel regulated by SOLAS.

The masters and shore-based stowage planners must be mindful of mis-declared weight hazard, because this is an important first line of defence. While handling containers, if a stevedore suspects an inconsistency with the declared weight, he must bring it to the notice of the master. Such containers must be weighed again at the terminal and accepted only if the difference is within tolerance limits.

Free Surface Effect (FSE): A partially filled tank in a vessel, whether the bunker fuel tank or ballast water tank, is known as a “slack tank”. A reduction in stability caused by liquids in slack tanks is known as “Free Surface Effect”. This condition creates a rise in the vessel’s Centre of Gravity that can be potentially disastrous to the vessel’s stability. Awareness of the FSE factor and good rapport between the master and the engineers go a long way in reducing the incidents of slack fuel and water in the ballast tank.

Synchronous Rolling: This happens when the vessel’s natural rolling period gets synchronized with the period of wave encounter, resulting in the ship heeling over and getting rolled further by the wave’s action. When the vessel encounters a series of swells in a way that the wave period corresponds with the natural rolling period, the vessel will have no time to regain balance before the next wave strikes, resulting in a capsize. Vessels carrying containers in particular may get heeled over even further by the force of wind and swell action. Lowering the vessel’s Centre of Gravity by drawing in ballast water alters the roll period in a way that it no longer matches the wave of the sea and swells. Changing the ship’s course introduces a yawing effect that alters the approaching wave frequencies. Adjusting the vessel’s momentum can reverse the “ship-wave” synchronization and bring it back to balance.

Found this article interesting? Let’s look at the other blogs by VS&B that are packed with equally informative reads from the world of container shipping.

The VS&B Containers group, functioning from Chennai, is a key provider of new and used shipping containers since 1996. Their varied fleet comprises dry containers, reefers, open top containers and flat-rack containers. VS&B gives customers the leverage to get used and new containers from around the globe through their extensive network of depots and diverse inventory. The company specializes in container trading, container leasing, empty container repositioning and has a separate division that develops software solutions for the logistics industry.

Please contact traders@vsnb.com and secure your containers on time!

Facts and figures stated in the blog are gathered from reliable sources on the internet.